September 24, 2019 | Housley Carr (RBN Energy LLC) – A build-out of NGL fractionators, steam crackers and export terminals for ethane, LPG and ethylene is actively in progress along the Gulf. This growth is spurring the development of new storage capacity — not just at the Mont Belvieu NGL hub, but in other, nearby areas with access to fracs, crackers and export docks. Much of this new storage capacity is being developed by companies that fractionate mixed NGLs and sell so-called “purity products” to meet their internal needs. However, at least one project is being built by what you might call an “independent,” whose aim is to connect to multiple pipelines and provide storage services to customers, without taking title to products alongside their customers. Today, we continue our series on existing and planned NGL storage facilities along the Gulf Coast with a look at Caliche Development Partners’ new storage complex in Beaumont, TX.

As we said in Part 1 of our series, storage capacity and the ability to quickly move mixed NGLs (also known as y-grade) and purity products to where they need to be are critically important to those whose assets rely on a steady stream of these commodities for operation, production, transport, fractionation and export, as well as to those who crack NGL purity products to make ethylene and other products. For example, y-grade coming out of gas processing plants and being piped to a fractionation hub (or individual fractionator) needs to be put in storage until it is called upon. Then, mixed NGLs are pulled from storage and delivered to fractionation facilities. Once y-grade is fractionated, each of the resulting purity products needs to be put into its own distinct storage facility until demand — which can be lumpy — pulls it further down the supply stream. Also, steam crackers and export terminals receive and store purity products (ethane, propane, normal butane, isobutane and natural gasoline) to stage them for consumption (at crackers) or for loading onto ships. Steam crackers also need a place to store ethylene once it’s produced.

The most economic and practical way to transport and store y-grade, individual NGL purity products and ethylene is in their liquid state, which necessitates (for all but natural gasoline) that the transport and storage occur under high pressure. And the most cost-effective way to provide large volumes of storage capacity at high pressure is to develop underground storage caverns within salt dome formations. The injection and withdrawal of liquid hydrocarbons such as y-grade and purity products — as well as ethylene and propylene, the primary product of steam crackers — into and out of underground salt cavern storage wells is accomplished by a “brine displacement” method. Each cavern is always filled to its top with some brine (salt-saturated water) and some hydrocarbon product (y-grade, ethane etc.); because brine has a greater density, the pressurized liquid product “floats” on top of the brine. To inject liquid hydrocarbons into the well, brine is pumped out of the cavern into a brine pond on the surface, and the y-grade or purity product being injected flows in to fill the void being created at the top of the cavern as the brine is withdrawn. (The process for withdrawing liquid hydrocarbons is the exact opposite: brine is pumped into the salt cavern and y-grade or purity product is lifted out.)

There is currently about 260 MMbbl of NGL-related storage capacity in place at Mont Belvieu (red star in Figure 1), and more than 100 MMbbl at salt cavern facilities elsewhere along the Gulf Coast in Texas (blue stars). Tens of millions of barrels of additional storage capacity are in various stages of development, with one of the biggest single projects being Caliche Development Partners’ Coastal Caverns facility in Beaumont (green star) — the focus of today’s blog. 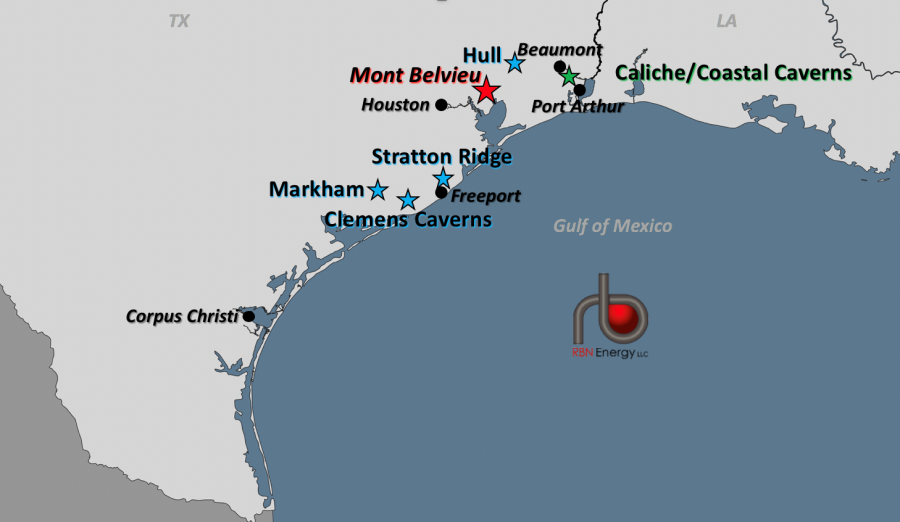 Houston-based Caliche Development Partners was formed in May 2016 with financial backing from Energy Spectrum Capital, North America's oldest dedicated midstream private equity fund. Caliche’s efforts in the past three-plus years have been centered on the development of salt-cavern storage capacity and related pipelines in the Beaumont/Port Arthur area — more specifically, its Coastal Caverns project in eastern Jefferson County, TX, about 50 miles east/northeast of Mont Belvieu. The company’s goals with the project are to provide third-party, fee-based storage options for those who need to store y-grade, purity products and ethylene along the supply chain, and to offer quicker, more reliable product delivery to — and egress from — its caverns. As we noted up above, Caliche does not take title to the commodities it stores; instead it operates as a party whose sole purpose is to provide competitive storage services to those who need it.

There are three primary elements to Coastal Caverns, the first being the main project site: 53 acres that Caliche owns atop the Spindletop salt dome, near the site of the famous 1901 Spindletop oil discovery that marked the birth of the modern U.S. petroleum industry. There, within the underground salt formation, Caliche has already developed a 5-MMbbl cavern for storing ethylene (it came online in December 2018), and is in the process of developing two additional caverns: a 5-MMbbl cavern due in-service in the fourth quarter of 2020 and a 3-MMbbl cavern due online in the first quarter of 2021. These two caverns each have the ability to serve ethane, y-grade or other purity products; Caliche is working with anchor customers to determine which product cavern best serves the needs of each. The company has permits in hand to develop an additional 46 MMbbl of storage, for a total of 11 caverns with a combined capacity of 59 MMbbl.

The second major element of the Coastal Caverns project is a 345-acre brine-pond site located about 2.5 miles west of the main project site and connected to it by a 24-inch-diameter brine pipeline. At the brine-pond site, two brine ponds (one with 1.3 MMbbl of capacity and the other with 2.2 MMbbl) are in operation and a 3.6-MMbbl pond is planned. The relationship between the total brine-pond capacity associated with a given NGL storage complex and the total capacity of the NGL storage caverns there — sometimes called the “brine coverage ratio” — is important to storage customers because it helps to determine how quickly storage caverns can receive and send out y-grade, or purity products. Put another way, the more barrels of brine-pond capacity you have available for every 100 bbl of cavern storage, the more brine you can rapidly evacuate from a cavern to fill that space with product — or pump into the cavern to remove product for export or for use downstream. With 3.5 MMbbl of brine-pond capacity in operation and 5 MMbbl of ethylene storage currently in place at Coastal Caverns, Caliche has a brine coverage ratio of 70%, or more than double the 25% ratio for Mont Belvieu as a whole.

Coastal Caverns’ third element is a header pipeline system to provide access to and from its NGL/ethylene storage facility. The dashed brick-red line in the Figure 2 map below shows the Coastal Caverns 13-mile ethylene header that has operational connections between the Caliche storage facility (brick-red pentagon) with three ethylene pipelines in the Beaumont area owned by ExxonMobil (lavender line), Flint Hills Resources (purple line) and DowDuPont UCAR (mint-green line), and is designed to allow connections to other ethylene pipelines in the area as they are made available. 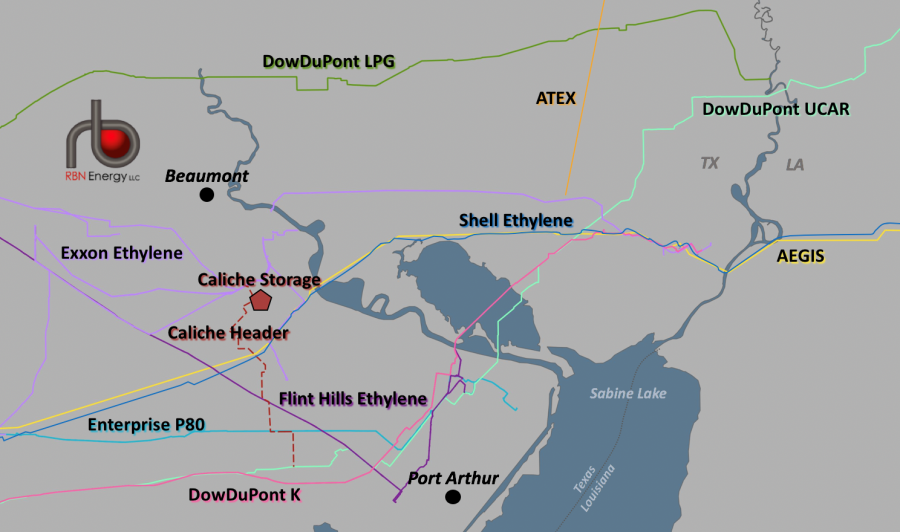 Figure 2. NGL and Ethylene Pipelines in the Beaumont Area. Sources: Caliche and RBN

Figure 2 also shows y-grade and purity-product pipelines that crisscross the area near Caliche’s Coastal Caverns project. The company plans to mirror its ethylene header with headers for other commodities as it adds cavern storage capacity for mixed NGLs and purity products at Coastal Caverns. The pace at which new storage caverns, brine ponds and pipelines are developed at Caliche’s Beaumont site will depend, of course, on the degree to which prospective customers need storage capacity in that part of the Gulf Coast. As we said up top, more and more y-grade will be flowing to the coast for fractionation, more purity products will be consumed in the region’s new steam crackers, and more ethane, LPG and ethylene is likely to be loaded onto ships for export — all of which would appear to bode well for the Coastal Caverns project. The project has competition though. In the next blog in this series, we’ll look at another NGL storage project under development along the Gulf Coast.

“Friends in Low Places,” written by Earl Bud Lee and Dewayne Blackwell, was a #1 hit single for country music star Garth Brooks, and remains a crowd favorite at his shows. It is a track on Garth’s second studio album, No Fences, which was released in August 1990. No Fences was recorded at Jack's Tracks Recording Studio in Nashville, with Allen Reynolds producing. It yielded four #1 singles on the Billboard Hot Country Songs chart. The album would go to #1 on the Billboard Top Country Albums list and #3 on the Billboard Top 200 Albums chart.

No Fences helped launch Garth Brooks into international superstar status, and helped bring country music into the spotlight again. Personnel on the record were: Garth Brooks (lead and backing vocals, acoustic guitar), and 20 different Nashville session players. "Friends in Low Places" also had 30 friends and singers from low places helping out on the vocals, including its writers, Earl Bud Lee and Dewayne Blackwell.

Garth Brooks is an American singer-songwriter from Oklahoma. He has released 15 studio albums, two live albums, three compilation albums and 67 singles so far in his career. He has won 23 Academy of Country Music Awards, 20 American Music Awards, three ASCAP Awards, 17 Billboard Music Awards, 13 Country Music Association Awards and two Grammy Awards. He is a member of the Country Music Hall of Fame and the Songwriters Hall of Fame. According to the Recording Industry Association of America, he is the best-selling solo albums artist in the U.S. with over 148 million albums sold in the states. He still records and tours, and is currently involved in a "Dive Bar" concert series of seven shows at smaller venues.