August 5, 2019 | Housley Carr (RBN Energy LLC) – Rising U.S. production of NGLs and so-called “purity products” like ethane and propane, as well as growth in steam cracker capacity and NGL and ethylene exports, are giving added importance to NGL and ethylene storage capacity in underground salt caverns along the Gulf Coast. Mont Belvieu, TX, has long been the epicenter of both fractionation and salt-cavern NGL storage — and it will remain so — but there are other areas along the Texas coast with frac capacity and NGL storage, as well as steam crackers and export docks. The questions now are, is there enough in the right locations, and can what’s stored there be received and quickly sent out? Today, we begin a look at existing and planned NGL storage facilities along the Texas coast that are not in Mont Belvieu.

Increased production of crude oil and natural gas in a number of major U.S. shale plays has resulted in higher and higher production of mixed NGLs — also known as y-grade. We have chronicled these gains in a number of RBN blogs, including Bring It On, where we noted that in 2019, produced volumes of NGLs (not counting ethane that is “rejected” into natural gas) are approaching 5 MMb/d — roughly double their level back in 2012 — and production is expected to increase by another 1 MMb/d by the mid-2020s. (The Permian and Marcellus/Utica account for significant shares of the NGL production gains in recent years.) We have also blogged about the new NGL pipeline capacity being built to transport y-grade to fractionation and NGL storage hubs; the shortfall in fractionation capacity that emerged last summer (see Hotel Fractionation); the development of new ethane-based steam crackers, most of them along the Gulf Coast (see Reason to Believe); and the build-out of new LPG export capacity (see Between Mont Belvieu and the Deep Blue Sea — and, with a late-July update, People Get Ready).

Storage capacity and the ability to quickly move y-grade and purity products to where they need to be are critically important to those who produce, transport, fractionate and consume NGLs. For example, y-grade being piped to a fractionation hub (or individual fractionator) needs to be put into storage while it awaits fractionation, and once y-grade is fractionated, each of the resulting purity products needs to be put into its own, distinct storage facility until it is transported further down the supply stream. Also, steam crackers and export terminals need to receive and store purity products (ethane, propane, normal butane, etc.) for use and for loading onto ships, respectively.

As we said in Wild Ride, a Drill Down Report on fractionation and NGL storage, the most economic and practical way to transport and store y-grade and individual NGL purity products (ethane, propane, normal butane, isobutane and natural gasoline) is in their liquid state, which necessitates (for all but natural gasoline) that the transport and storage occur under high pressure. The most cost-effective way to provide large volumes of storage capacity at high pressure is to develop underground storage caverns within salt dome formations like the huge one (two miles wide and six miles deep) that lies about 2,000 feet below Mont Belvieu. Over the past 60-plus years, about 260 MMbbl of storage capacity has been developed there — more than anyplace else in the world. With all of that storage capacity for NGLs available at Mont Belvieu, it made sense for the industry to develop the planet’s largest center of NGL fractionation on top of it.

About 260 MMbbl of NGL storage capacity now in place in Mont Belvieu, most of it owned by midstream companies with extensive NGL pipeline and fractionation portfolios. Just over half of the total (~130 MMbbl; orange wedge in Figure 1 pie chart to left) is owned by Enterprise Products Partners; the other companies with significant storage at Mont Belvieu are Energy Transfer’s Lone Star NGL subsidiary and Targa Resources (each with ~50 MMbbl; yellow and green wedges, respectively), and ONEOK, LyondellBassell and ExxonMobil (with a total of ~30 MMbbl among them, red wedge). Elsewhere along the Texas coast, there is a total of about 100 MMbbl of NGL storage capacity, much of it tied to either fractionators or steam crackers. The companies holding the bulk of this “non-Mont Belvieu” storage capacity — at places like Stratton Ridge, Markham, Clemens Caverns and Hull (blue and orange stars in Figure 2) — include Dow with about 40 MMbbl (green wedge in pie chart to right in Figure 1), Chevron Phillips Chemical with ~20 MMbbl (blue wedge), and Keyera, Phillips 66, Texas Brine, BP and others with ~10 or less each for a combined 40 MMbbl (yellow wedge).

Phillips 66 is one of a number of companies planning new NGL storage capacity along the Texas coast but away from Mont Belvieu. The company’s Clemens Caverns (orange star in Figure 2) near Brazoria, TX, is an underground storage facility with 9 MMbbl of existing capacity for storage of y-grade, propane and normal butane in a half-dozen caverns. Phillips 66 currently is developing another 6 MMbbl of capacity — including some for ethane — at Clemens Caverns to support the development of new fractionation capacity nearby and a new ethane-only steam cracker down the coast. 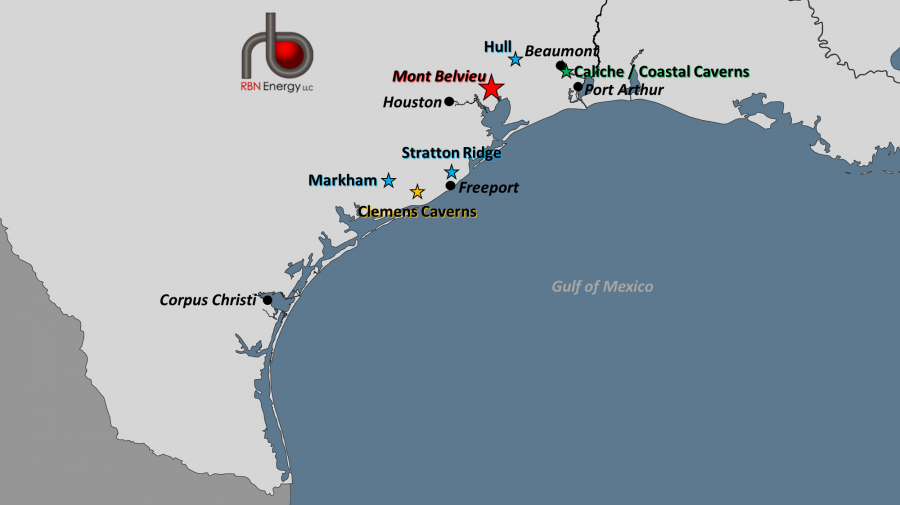 The new frac capacity will be at Phillips 66’s Sweeny fractionation complex, which is located about 15 miles northwest of Clemens Caverns. At Sweeny, Phillips 66 owns a 100-Mb/d fractionator (Frac 1) and is building two 150-Mb/d fractionators (Fracs 2 and 3) that are both scheduled to start operating in the fourth quarter of 2020. Also, Phillips 66 announced on July 26, 2019, that it has sanctioned the construction of Frac 4 — another 150-Mb/d fractionator — that the company expects to complete at its Sweeny complex in the second quarter of 2021. The three new fracs are all supported by long-term customer commitments and will benefit from the existing and planned y-grade, propane, normal butane and ethane storage capacity at Clemens Caverns, as will Phillips 66’s 200-Mb/d LPG export terminal in close-by Freeport, TX.

The storage-capacity expansion at Clemens Caverns also is needed to support Phillips 66’s contract to supply ethane to a new, 4.0-billion-pound/year steam cracker that Gulf Coast Global Ventures (GCGV) — a joint venture of ExxonMobil and Saudi Basic Industries Corp. (SABIC) — have committed to build in Gregory, TX (near Corpus Christi), by 2022 (see Reason to Believe). In addition to the expansion at Clemens Caverns, Phillips 66 plans to construct a long-haul ethane pipeline from the salt dome storage facility to the new GCGV steam cracker; the C2G Pipeline (for “Clemens-to-Gregory”) will have a capacity of 240 Mb/d and is expected to be finished in mid-2021.

In upcoming blogs, we will look at other NGL storage projects being developed, including Caliche Development Partners’ ongoing construction of salt dome storage for ethylene and NGLs in the Beaumont-Port Arthur area (green star in Figure 2). Caliche’s Coastal Caverns is interesting in a few ways. In addition to capacity for ethylene (in operation since December 2018) and two other NGL caverns (one slated for operation in the fourth quarter of 2020 and the other in the first quarter of 2021), the project includes a 13-mile header system that crosses five ethylene pipelines owned by outside parties to connect to fractionators, purity-product consumers and export docks. What’s more, Caliche is developing a significant amount of brine-pond storage capacity nearby with the aim of being able to receive and send out hydrocarbon volumes more quickly than facilities in Mont Belvieu — an important consideration for market participants seeking firm deliverability.

“Friends in Low Places,” written by Early Bud Lee and Dewayne Blackwell, was a #1 hit single for country music star Garth Brooks in 1990. Lee and Blackwell came up with the idea for the song when they were eating with friends at a Nashville diner. When Lee realized he had left his money at home to pay for the meal, he told Blackwell not to worry, he "had friends in low places. I know the cook here." He and Blackwell knew that "friends in low places" would make a great song title, so the seeds were planted. They got Garth Brooks to sing on a demo of the song for them, and Brooks liked it so much that that he got the writers to agree to hold it for him to record for his No Fences album. It was Garth’s first single released from the album in August 1990. It went to #1 on the Billboard Hot Country Songs chart, and remains a crowd favorite at his live shows. Brooks adds a third verse to the song when he plays it live, with the audience singing the last six lines with him.

No Fences, Brooks’ second studio album, was recorded at Jack's Tracks Recording Studio in Nashville, with Allen Reynolds producing. It yielded four #1 singles on the Billboard Hot Country Songs chart. The album would go to #1 on the Billboard Top Country Albums list and #3 on the Billboard Top 200 Albums chart. No Fences helped launch Garth Brooks into international superstar status, and helped bring country music into the spotlight again. Personnel on the record were: Garth Brooks (lead and backing vocals, acoustic guitar), and 20 different Nashville session players. "Friends in Low Places" also had 30 friends and singers from low places helping out on the vocals, including its writers, Earl Bud Lee and Dewayne Blackwell.

Garth Brooks is an American singer-songwriter from Oklahoma. He has released 15 studio albums, two live albums, three compilation albums and 67 singles so far in his career. He has won 23 Academy of Country Music Awards, 20 American Music Awards, three ASCAP Awards, 17 Billboard Music Awards, 13 Country Music Association Awards and two Grammy Awards. He is a member of the Country Music Hall of Fame and the Songwriters Hall of Fame. According to the Recording Industry Association of America, he is the best-selling solo albums artist in the U.S. with over 148 million albums sold in the states. He still records and tours, and is currently involved in a "Dive Bar" concert series of seven shows at smaller venues.